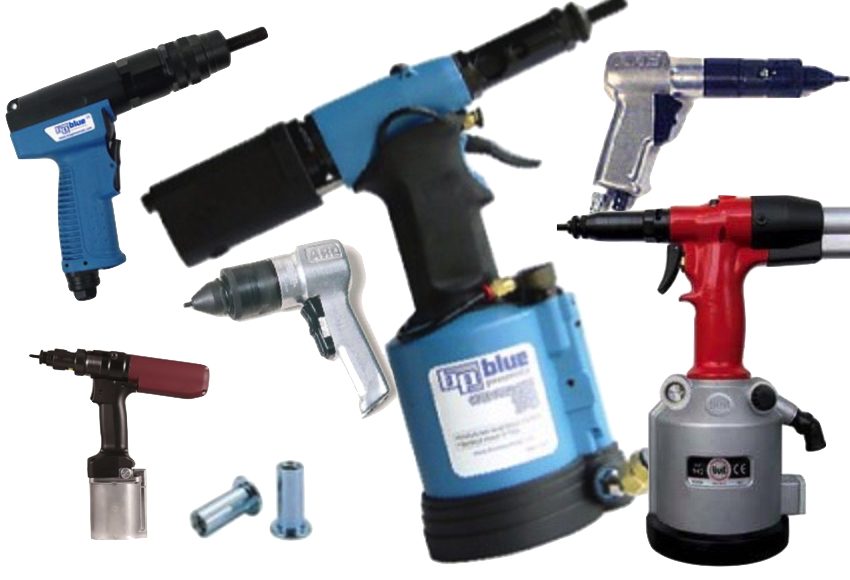 Have you ever wondered what the difference is when you see a pneumatic rivet nut tool labeled as a spin-spin versus a spin-pull-spin? Spin-spin or a spin-pull-spin are the two most common of the pneumatic rivet nut tools. Now let’s dig a little deeper to de-mystify the difference between these well-known types of rivet nut tools.
Let’s start with the most simplistic of the tools, the spin-spin. This pneumatic tool holds the largest market share and is known to be friendlier to one’s wallet. Quite frankly, this tool is extremely straightforward to use.
The operation of the device is entirely manageable; the trigger has two positions, forward and reverse. Essentially, you turn the rivet nut onto the mandrel a few turns by hand, place the nut into the pre-drilled material, then push the trigger in the forward direction until the rivet nut compresses, setting the rivet nut fully to the operator’s preference. To remove the mandrel from the rivet nut, press the trigger in the reverse mode and Voilà! These tools come in several sizes based on the rivet nut installed. The difference between each of these tools is the motor speed. The tools are set up to run at 3,000 RPM, 1,500 RPM, 600 RPM, 400 RPM, and lastly, the 275 RPM, which would be used to set the ½-13 and ½-20 rivet nuts.
Following, we have the spin-pull-spin or pull, which works quite similarly to the spin-spin with one extra action, as you probably guessed, the pull. These are more consistent and less likely to introduce operator error. To compare, the operator of the spin-spin tool can become overzealous when actuating the trigger, causing dimpling to the final product. Whereas, the operator of the spin-pull-spin is removed from the equation. The installation of the rivet nut is managed by setting the stroke before installation. Once the stroke sets, the finished product is not left to human error, which, as mentioned prior, can be more likely with the spin/spin tool, eliminating dimpling and other production errors.
No matter the project, big or small, you will be in good hands with these two pneumatic tools. In the end, it all depends on the project you have in mind, and the budget you are working with.
Previous Post
Next Post
Browse By Category
Top Sellers
New Releases
Select Brand